Northern Michigan's Griffin Loughran led the Wildcats and the WCHA with five points on two goals and three assists in NMU's sweep of Ferris State. The West Seneca, N.Y., native got his team back in the win column behind an even-strength tally Friday and empty-net goal Saturday. Loughran scored with less than a minute to play in the first period Friday night to cut the Ferris State lead to one goal, 3-2 before the Wildcats rallied for a 5-4 win. His three assists on the weekend tied for third nationally while his five total points was tied for fourth in the NCAA and led in the WCHA. This is Loughran's fourth career WCHA weekly honor. 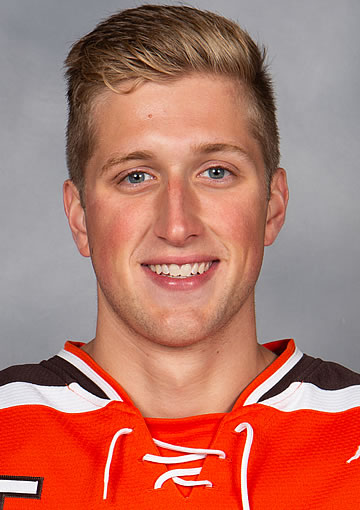 Bowling Green senior defensemen Justin Wells totaled three points on a goal and two assists for the Falcons in their weekend sweep over Michigan Tech. In Friday's contest, Wells logged the first goal of the game as well as an assist on the second for the first multiple-point game of his collegiate career. As for Saturday night, Wells added another assist to his line, coming on the game-winner for the Falcons. This is Wells' first career WCHA weekly honor.

Honorable Mention: Tyler Vold, Sr., Bemidji State: Recorded the first multi-assist game of his career with two helpers in Bemidji State's 4-1 non-conference win over Minnesota State on Friday. Blake Evennou, So., Ferris State: Tallied a goal and an assist along with five blocks in the Bulldogs' weekend series at Northern Michigan. Ben Newhouse, Sr., Northern Michigan: Led the nation in blocked shots on the weekend with nine in Northern Michigan's sweep of Ferris State.

Bemidji State's Zach Driscoll backstopped a Beaver penalty-kill unit that held then-No. 3/2 Minnesota State scoreless in five man-advantage attempts on Friday. The Apple Valley, Minn., native stopped 35-of-36 Maverick shots as the Beavers rolled to a 4-1 non-conference win. Driscoll's .972 save percentage and 1.00 GAA led all WCHA netminders on the weekend. This is Driscoll's eighth career WCHA weekly honor and second in a row this season.

Northern Michigan's Tim Erkkila registered his first career point Friday night when he assisted on AJ Vanderbeck's game-winning tally halfway through the third period of the Wildcats' 5-4 win over Ferris State. Erkkila went on to record his first multi-point game the following night with two assists in NMU's 5-3 victory to cap the weekend sweep of the Bulldogs. The Brighton, Mich., native registered six blocked shots on the weekend, second on the team and first among Wildcat rookies. His six blocked shots tied for third in the WCHA and 10th nationally and ranked first among league rookies and second among NCAA newcomers. With three assists, he tied teammate Ben Newhouse for a league best and tied for third nationally. This is his first career WCHA weekly honor.

Honorable Mention: Mitch Deelstra, Fr., F, Ferris State: Had both a goal and an assist along with seven shots on goal in the Bulldogs' weekend series at Northern Michigan. Arvid Caderoth, Fr., F, Michigan Tech: Had three points on three assists in Michigan Tech's series with Bowling Green to run his points streak to five games.